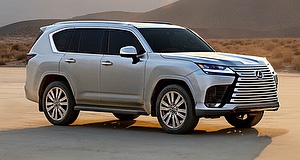 IF YOU were thinking that nabbing a Lexus LX might allow you to neatly sidestep the supply issues that have plagued the Toyota LandCruiser 300 Series, while netting you a vehicle that offers the same core capabilities, think again – Lexus Australia says its entire 2022 allocation of LXs is virtually sold out.

Officially launching just last week but with pricing and specifications being announced back in March, the order book for the LX filled up fast.

“Last year for example, we had sold about 300 [examples] of the LX. This year we’ve taken on 400 orders, and we’ve only just launched it, so very strong orders,” said Lexus Australia CEO John Pappas.

“Our main focus is that we communicate really strongly with our dealers and focus heavily on the customer management side regarding the lead times.”

It’s a strong start, and perhaps an unsurprising one given the LX range opens at $148,800, just $10K more than a Landcruiser 300 Sahara ZX. Counting some second-hand LC300s being sold privately at well above retail, the Lexus option is actually cheaper. However, there’s a predictable snag:

“We’re getting about 50 cars allocated to us for the eight-month window that we’ve got [remaining in the calendar year],” Pappas said. As with almost every other brand right now, Lexus is being constrained by supply in a big way.

“It’s an evolving situation at the moment, obviously with the whole global supply shortages. We’d love to get more cars and we’re working tirelessly with Lexus International to try and get more stock, but it’s been a big challenge for us.”

The reaction from customers to the LX has revealed some interesting data. At the top of the LX range sits the LX600 Ultra Luxury variant, a $210,800 flagship that replaces the second-row bench with a pair of power-adjustable fully independent armchairs – the left one also featuring a power-folding ottoman/footrest on the back of the front passenger seat, which slides forward to offer up to a metre of legroom.

It’s the most opulent – and perhaps selfish – Lexus model offered in this country, but despite its considerable price tag and four-seat capacity, around ten percent of LX orders are for the LX600 Ultra Luxury.

The ‘base’ model, which is the only variant in the range to offer a seven-seat capability, accounts for the lion’s share of orders at just under 50 per cent of total volume, however the vast majority of orders for the vanilla LX500d and LX600 have also opted for the $5500 enhancement pack that adds 22-inch alloys, a moonroof and a power-operated tailgate.

Unlike the LC300 LandCruiser, the LX family also offers the choice of a petrol powertrain. The LX’s 3.5-litre twin-turbo V35A-FTS V6 petrol engine is closely related to the LS500’s engine and produces 305kW and 650Nm of torque.

It might be down on torque relative to the F33A-FTV 3.3-litre turbocharged V6 diesel that’s shared between the LandCruiser and the LX500d (227kW/700Nm), but with a 0-100km/h time of 7.0 seconds it’s a full second fast than the diesel option.

It drinks heavily with a claimed average of 12.1 litres per 100km (versus the LX500d’s 8.9L/100km average), but that doesn’t hold it back from the winning the popularity contest. With roughly 60 per cent of the order bank being for LX600 variants, it’s clear that power reigns supreme at this end of the SUV/4×4 market.

But if you were wondering where an entry-level five-seater is, or indeed a high-spec seven-seater, sources within Lexus told GoAuto that there was no imperative to chase either of those specific configurations, with customer demand showing that the further up the range ladder they went, the less essential a seven- or eight-seat format became.

Could a five-seat version of the base LX500d and LX600 have enabled the company to squeeze the price of entry down lower? Perhaps, but for Lexus, chasing the bottom end of the market is not quite part of their current ethos.