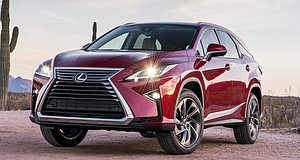 LEXUS will further expand its American SUV line-up with the introduction of the full-size, three-row TX SUV – a competitor to the BMW X7 and Mercedes-Benz GLS-Class – in 2024.

Based on the Toyota Grand Highlander – a stretched version of the model we know as the Kluger, which is due to debut in the US market this year, the TX will ride on Toyota’s GA-K platform, and slot in above the RX L (pictured) in Lexus’ growing SUV portfolio.

The new model will offer genuine three-row seating and the option of petrol or petrol-electric power. Power units tipped for the Grand Highlander and TX include the long-serving 218kW/350Nm 3.5-litre V6 petrol and 142kW/242Nm 2.5-litre four-cylinder hybrid.

According to Automotive News, the TX will be manufactured at Toyota’s manufacturing facility in Princeton, Indiana, and will arrive in dealerships approximately six months after its Toyota cousin.

The publication points out that while either model is yet to be formally announced, the $US803 million ($A1.1b) overhaul of the Toyota motor manufacturing plant in Indiana suggests both Toyota and Lexus versions of the full-size SUV are indeed imminent.

Last year, Automotive News quoted a Toyota USA spokesman as saying the two vehicles would feature a semi-automated driving system, a remote parking system (allowing a driver to manoeuvre the vehicle from the outside using their smartphone) and a digital key that turns a user’s smartphone into their key and allows them to share it digitally.

The company also said the Grand Highlander and TX would feature seating for up to eight, which suggests an optional bench seat in the second row. Like other models in Lexus’ SUV range, the TX may also be specified with a four-seat layout that avails well-heeled customers with an even more spacious and luxurious interior configuration.

Automotive News reports that US Lexus dealers have sought a larger three-row SUV “for several years” to fill the space between the RX L and body-on-frame LX.

“The TX can’t come fast enough for dealers who can’t wait to get in on their showroom floors,” Lexus National Dealer Advisory Council chairman John Iacono told the publication.

“The only vehicle that we have right now in that size is the RX L. It’s done a nice job for us, but it’s not the vehicle we’re waiting for. The design of the TX will attract a much younger buyer than what we have now – younger buyers in their 40s or 50s with families – and those are buyers we need in our showrooms.

“This vehicle is going to do just that. It’s everything we want it to be.”

The news has fuelled further speculation that Toyota will begin selling its Crown sedan and SUV range in the United States from 2024. The Aichi-based company is tipped to replace its Avalon and LandCruiser variants with a new “Crown-badged” range.

It is understood the new Crown will be based on the Japanese-market Crown sedan and will be exported to China and North America with sales to commence in 2023. A battery-electric version is due to follow in 2024, while a plug-in hybrid variant will be sold in the Japanese domestic market only.

Confusingly, at least one variant of the redesigned Crown sedan – expected to be a performance hybrid-powered version – will also go on sale in the United States later this year, where it will compete with the likes of the Audi A6, BMW 5 Series, Genesis G80, Mercedes-Benz E-Class and similar sedans, a source told publication Automotive News.

The US-based publication said it believed the Crown SUV would slot in above the newly introduced Toyota Sequoia SUV (which is based on the 300-series LandCruiser and Tundra pick-up), but it was unclear on whether the model would offer two- or three-row seating – or the option of both.