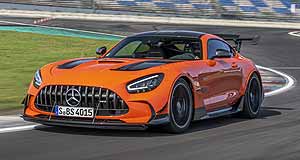 MERCEDES-AMG has announced the local pricing for its savage GT Black Series coupe, with the new brand flagship arriving in showrooms in the second quarter of next year priced from $796,900 plus on-road costs.

On the off chance that you are able to drop the best part of $1 million on a new car, that is where your luck ends, with all 28 Australia-bound examples of the GT Black Series already spoken for by well-heeled Mercedes customers.

Its pricetag puts it a long way upstream of the rest of the GT range, which is currently topped by the GT R Pro Coupe at $453,200 plus costs.

It also makes the Black Series comfortably the most expensive offering in the extensive Australian Mercedes-Benz Cars line-up.

As the first ‘Black Series’ model from AMG since 2013, the GT Black Series comes with an expectation of extreme performance, and the answer from AMG’s engineers was to create the brand’s most powerful V8 production engine to date.

Power is channelled exclusively to the rear wheels via a seven-speed dual-clutch automatic transmission, which results in a sprint from standstill to 100km/h in 3.2 seconds, and to 200km/h in 9.0s.

The blown bent-eight is fitted with a new flat crankshaft, while the intercoolers and turbos have been beefed up to allow the massive levels of power.

Performance tweaks are the name of the game for the Black Series, with AMG engineers upgrading the vehicle in every conceivable way to make it as savage as possible.

The selectable drive programs have been recalibrated to offer sportier drive characteristics, while adapted transmission cooling helps deal with the modified transmission ratios and extra work required of the seven-speed dual-clutch.

Special coilover suspension with adjustable spring preload is included, with the ride height able to be lowered by 10mm and wheel load distribution individually adapted for each wheel.

As expected for the brand’s most hardcore model, a number of aerodynamic enhancements have been applied to the Black Series, with many borrowed from the AMG GT3 racecar.

The carbon-fibre bonnet features a pair of large exhaust air outlets while the carbon-fibre front splitter features two manually adjustable settings – Street and Race – to optimise dynamism when on the racetrack.

At the rear, an extremely prominent two-stage aerofoil rear spoiler is mounted below the rear windshield, complemented by a new rear apron and chunky rear diffuser.

The movable flap in the upper blade of the spoiler can be adjusted by up to 20 degrees, to either reduce resistance or increase downforce.

Along with the liberal use of carbon-fibre, a number of weight-saving measures have been applied including the use of thin, lightweight glass for the front and rear screens, carbon-ceramic brakes, hollow-tube steel for the rear axle and 19-inch front/20-inch rear forged light alloy wheels, the latter of which are shod in specially developed Michelin Pilot Sport Cup 2 rubber.

Knowing the Black Series will be used primarily for hardcore driving, all 28 Australian examples will come as standard with the Track Package, which includes a lightweight bolted titanium-tube rollover cage and four-point seatbelts.

The SLK 55 Black from 2006 was the first model to be produced by Merc for its special Black Series lineage, while the last the SLS Black Edition from 2013 was the last before now.