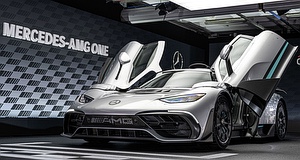 FIVE years after it was revealed as the Project One prototype at the Frankfurt Motor Show, Mercedes-AMG has finally revealed its production-ready “One” hyper car.

Essentially a street-legal version of the Three-pointed Star’s Formula 1 racing machine – replete with an e-performance hybrid driveline that produces a staggering peak output 782kW – the $3.4 million two-seater combines a turbocharged 1.6-litre V6 with four electric motors to power the One to an electronically-limited top speed of 350km/h.

Tipping the scale at just 1695kg, the Mercedes-AMG One is claimed to accelerate from standstill to 100km/h in 2.9 seconds, with the 200km/h mark coming up 4.1 seconds later.

“With the Mercedes-AMG One, we have more than pushed the envelope,” said Mercedes-AMG chairman of the board of management, Phillip Schiemer.

“The immense technical challenges of making a modern Formula 1powertrain suitable for everyday road use have undoubtedly pushed us to our limits.

“Over the duration of the development period, many may have though that the project would be impossible to implement. Nevertheless, the teams in Affalterbach and the UK never gave up and believed in themselves.

“I have the highest respect for all those involved and am proud of this team’s achievement. To put such a hypercar on the road is certainly unique,” he added.

Production of the model was scheduled to commence in 2019, but tighter emissions regulations saw the model’s market introduction delayed until the powertrain’s characteristics could be tuned to a road-legal state. Chief among these challenges were the One’s ability to idle at less than 5000rpm – and redline below 14,000rpm. AMG engineers eventually tamed the engine to idle at 1200 revs and redline at 11,000rpm.

The Mercedes-AMG One’s electric motors include two driving each front wheel, a third within the petrol engine (delivering a further 120kW to the crankshaft), as well as the fourth – mounted to the turbocharger – that contributes a further 90kW to the system’s overall output. Battery power comes from a lightweight and intelligently cooled 8.4kWh lithium-ion pack. Six drive modes are offered in the One, including a pure electric setting.

“The performance data of the Mercedes-AMG One is ultimately only a small excerpt of the technology offered in this vehicle. Apart from a Formula 1 powertrain that generates 1063hp from a relatively small, highly efficient internal combustion engine in combination with four electric motors, the monumental task was above all the exhaust gas after treatment,” said Mercedes-AMG technical managing director Jochen Hermann.

“This project was partly a curse and a blessing at the same time. But we have walked the stony path, and as a technician, you naturally get carried away with all the details.”

The aluminium-intensive monocoque chassis is suspended by a five-link push-rod suspension – with adjustable anti-roll struts – at each corner. The struts are mounted transversely to the direction of travel, effectively replacing the traditional stabiliser bar, while all-wheel torque vectoring is adaptable depending on the drive mode selected.

Meanwhile, the design of the One’s carbon-fibre shell draws inspiration from Mercedes-AMG F1 cars and is said to begin generating downforce from only 50km/h. Engineers say the design maximises downforce and balance, which increases in line with the One’s speed to offer as much as five times the downforce (in Track mode) as it does in Highway mode. AMG’s engineers did not reveal just how much downforce is available.

Both are shod with Michelin Pilot Sport Cup 2 M01 tyres, which were specially developed for the car. Braking is provided by carbon-ceramic rotors measuring 396mm at the front and 381mm at the rear, clamped by six and four piston calipers respectively.

The One’s cabin, accessed via butterfly wing doors, features expectedly sporty seats and a rectangular F1-inspired steering wheel (with airbag!), a pair of 10.0-inch screens for the instrumentation and other data, climate control, an audio system and lashings of metal trim, carbon-fibre and leather. The rear-view system is entirely camera-based.

Mercedes-AMG will give the public its first look at the One at the Goodwood Festival of Speed later this month (23-26 June). Customer deliveries are expected to commence from the second half of this year.

Oh, and if you were thinking of putting your hand up for one, all 275 examples are already spoken for.