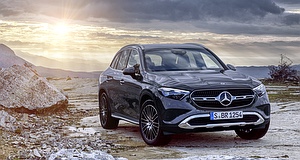 MERCEDES-BENZ recently unveiled its second-generation GLC-Class SUV ahead of the model’s arrival in Australian dealerships in early 2023.

Incorporating styling cues inspired by those of the newly revealed C-Class – and with a range of 48V mild-hybrid petrol and diesel and plug-in hybrid drivelines – the rival to the Alfa Romeo Stelvio, Audi Q5 and BMW X3 features an enhanced array of technology and safety inclusions, all of which are tipped to make it into Australian-spec cars.

Diesel variants include the GLC220d 4Matic, whose 2.0-litre turbocharged four-pot develops 145kW/440Nm and accelerates from standstill to 100km/h in 8.0 seconds.

Globally, the GLC range is available with three plug-in hybrid EV drivelines (PHEV): two petrol and one diesel, each with a claimed all-electric driving range of over 100km (WLTP). Power is supplied by a 100kW/440Nm electric motor fed by a 31.2kWh battery.

Plug-in hybrid GLC variants can be charged in as little as 30 minutes via a 60kW DC charger and are also provided with an 11kW AC charging pack for home or office use.

All engine options are paired to a nine-speed automatic transmission, with the sportier GLC43 AMG and GLC63AMG tipped to follow the launch line-up mid next year.

All GLCs ride on four-link front and multi-link rear suspension, while AMG Line versions have air springs. Adaptive damping is optional, as is rear-axle steering, which reduces the SUV’s turning circle 0.9 metres to just 10.9m. Track widths have increased by 6mm up front (now 1627mm) and 23mm at the rear (now 1640mm) to the benefit of stability.

Stylistically, the new GLC-Class is distinguishable by its new LED (optionally adaptive) headlamps and reshaped bumpers. The SUV’s profile follows the C-Class in becoming smoother, while the LED taillights now offer a three-dimensional look. Alloy wheels are standard across the range and offered in diameters ranging from 18- to 20 inches.

The GLC’s cabin execution is also derived from that of the latest C-Class, and equipped  with a 12.3-inch digital instrument panel and 11.9-inch touchscreen infotainment array powered by the brand’s latest MBUX software. A larger panoramic roof is available, as are massaging front seats and a 15-speaker premium Burmester audio system.

Additional safety technology sees Benz’s adaptive cruise control system now respond to stationary vehicles at speeds up to 100km/h (an improvement of 40km/h), while lane-keeping tech, stop sign and red-light recognition are added. A “see-though” bonnet – part of the GLC’s 360-degree camera system – further improves the model’s outward visibility, while a trailer-reversing assistant can autonomously back up a trailer for you.

“With the new GLC, we are continuing a success story into the future,” said Mercedes-Benz board member and head of sales, Britta Seeger.

“Since its introduction (in 2015), 2.6 million customers have decided in favour of a model in this popular SUV series. As the best-selling Mercedes-Benz model in the last two years, it is one of the most important vehicles in our product portfolio.

“I am confident that the new GLC, with its combination of dynamic driving enjoyment, modern design, and functions such as the off-road cockpit and our MBUX augmented reality navigation, will thrill adventurers and families.”

Mercedes-Benz Cars Australia has yet to reveal local specs or pricing of its updated GLC-Class but says further details will be offered closer to the model’s local launch.