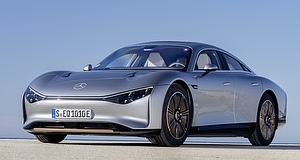 MERCEDES-BENZ Vision EQXX has now proven itself on the roads of Europe. The brand’s concept model set a record-breaking low average energy consumption figure of just 8.7kWh per 100 km on a cross-country trip that began in Sindelfingen and crossed the Swiss Alps and Northern Italy before ending in the village of Cassis on the Côte d’Azur.

Contending with a variety of weather conditions – and normal traffic – the Vision EQXX covered more than 1000km on a single battery charge, at times reaching speeds of up to 140km/h on Germany’s autobahns, and travelling near the speed limit elsewhere, said Mercedes-Benz. The test unit completed its trip with 15 per cent battery charge left!

The long-distance drive was completed with the charging socket sealed and accompanied by an independent expert from certification body TÜV Süd. Mercedes-Benz says the drive is symbolic of the journey from internal combustion to electric power and proves the technology is now ready to undertake even the longest road trips.

“We did it! Powering through more than 1000 kilometres with ease on a single battery charge and a consumption of only 8.7kWh per 100km in real-world traffic conditions,” said Mercedes-Benz CEO Ola Källenius.

“The Vision EQXX is the most efficient Mercedes-Benz ever built. The technology programme behind it marks a milestone in the development of electric vehicles. It underpins our strategic aim to ‘Lead in Electric’.”

Mercedes-Benz says the journey proves that the technology behind the Vision EQXX is now feasible for market introduction. The model combines a slippery drag coefficient of just 0.173 with technologies such as a 180kW (peak) electric motor set on the rear axle, which draws power from a 100kWh battery pack set beneath the passenger cabin.

The system can be topped up via a series of 117 solar cells set in the vehicle’s roof, which can contribute as much as 25km of driving range each day.

The battery pack of the Vision EQXX is 50 per cent smaller and 30 per cent lighter than the one fitted in the Mercedes-Benz EQS and is charged via a conventional 900V high-speed plug. It is also up to 95 per cent efficient, which means that as much as 95 per cent of the energy it displaces ends up at the wheels.

Mercedes-Benz said in real-world scenarios, most owners would only need to charge their Vision EQXX once a month, because the model is capable of travelling up to 300km on just 15 minutes’ charge time.

The Vision EQXX rides on model-specific Bridgestone Turanza Evo tyres that provide both rolling resistance and weight reductions of up to 20 per cent over conventional tyres.

The “road-legal research prototype” faced a variety of terrains and conditions on its European trek, encountering temperatures ranging from three to 18 degrees Celsius.

The vehicle’s relatively low weight (1755kg) allowed it to conserve energy on the 14km uphill slog from Amsteg to Göschenen, said Mercedes-Benz – the 495kg battery pack was by far the vehicle’s heaviest component. On the downhill section following the Gotthard Tunnel, the model “barely used” its mechanical brakes, instead recuperating as much energy as possible to top-up the battery for the remainder of the trip.

As the vehicle navigated the roads of northern Italy, a sunny break allowed the rooftop solar cells to add a further allowance of two per cent to the energy-dense battery and, thanks to minimal energy losses across the motor, inverter and transmission, the extra change meant the vehicle was able to travel a further 25km on solar power alone.

Through Italy, Switzerland and into France, the car’s efficiency assistant provided the driver with information on energy flow, battery status, topography and even the direction and intensity of the wind and sun. Delivered through a one-piece display surface that spans the entire width of the interior, the EQXX’s digital interface “supports seamless interaction between the vehicle and the driver” and “opens up new digital possibilities by reacting instantly to the driver’s needs”, Mercedes-Benz says.

Mercedes-Benz chief technology officer Markus Schäfer says the journey has unequivocally proven the real-world potential of outstanding efficiency for electric vehicles and that more innovative developments are already in the brand’s pipeline.

“With our successful road trip to the South of France, we’ve shown that efficiency is the new currency. And this success also clearly speaks for our new collaborative development process, incorporating many learnings from the Mercedes-AMG F1 team and its cutting-edge expertise in electric powertrains.

“The Vision EQXX is the result of a comprehensive programme that provides a blueprint for the future of automotive engineering. Many of the developments are already being integrated into production, some of them in the next generation of modular architecture for compact and midsize Mercedes‑Benz vehicles. And the journey continues.

“With the Vision EQXX, we will keep testing the limits of what’s possible.”