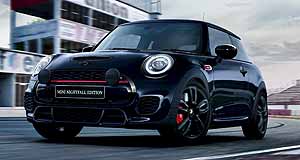 MINI Australia has announced a limited run of its JCW hot hatch called the Nightfall Edition, which brings a number of darkened exterior elements and performance-focused kit to the special model.

Priced from $70,990 driveaway, the Nightfall Edition will be limited to just 50 units in Australia, 40 of which will be based on the JCW hatch, while the other 10 will be made up of the convertible, which asks $75,290 driveaway.

As its name suggests, the Nightfall Edition gives the JCW pair a sinister appearance, with a number of blacked-out exterior touches starting with the Enigmatic Black Metallic paint finish, while all of the previously chrome exterior elements – such as the headlight covers, door handles, waistline finishers and exterior badging – have been changed to piano black.

Moving inside the cabin, the darkened highlights continue with piano black interior surfaces, carbon black leather/microfibre JCW sports seats and, for the Hatch, an anthracite headliner.

Other improvements made to the cabin include a JCW steering wheel finished in Alcantara, a carbon-fibre JCW handbrake and a 5.0-inch digital instrument cluster in place of the traditional analogue cluster.

No changes have been made to the powerplant underpinning the Nightfall Edition, namely a 2.0-litre turbo-petrol four-cylinder engine developing 170kW/320Nm, with power sent to the front wheels via an eight-speed automatic transmission.

The sprint from standstill to 100km/h is completed in 6.1 seconds in the Hatch, while the Convertible arrives 0.4s later.

Fuel consumption for the Hatch and Convertible is rated at 6.0 and 6.3 litres per 100km respectively, while emissions stand at 137/144 grams of CO2 per km.

Mini Australia general manager Brett Waudby said the popularity of the JCW line in Australia meant the Nightfall Editions made for a good fit for the local market.

“We’ve seen our highest-ever rates of John Cooper Works sales in Australia this year, and these new Nightfall Editions are sure to up the ante,” he said.

“We’ve packed a massive amount of additional John Cooper Works upgrades into both cars, and we expect both cars to deliver heart-pounding thrills on both road and race track.”

To the end of August, the Mini brand has sold 1924 combined vehicles, marking a 14 per cent dip compared to the same period last year.