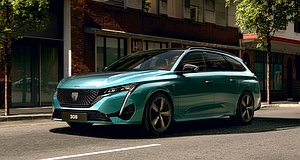 PEUGEOT Australia has confirmed that its new-gen 308 will go on sale during the final quarter of this year.

The French marque’s compact car will not only be available in hatchback and wagon guises, but the range will ultimately be headed by a plug-in hybrid variant.

It’s been more than a year since the third-gen Peugeot 308 made its world debut; at the time, the French offering was expected to arrive Down Under in Q1 2022, but owing to a number of factors, the model – the first to bear the brand’s new coat of arms – will now debut at the end of the year.

The distinctively styled 308 is based on the Stellantis Group’s shared Efficient Modular Platform (EMP2) and is 110mm longer than its predecessor, but it has a 20mm lower roofline and, courtesy of its stretched 2675mm wheelbase, offers extra rear occupant space and a 412-litre load bay.

The new model’s front-end styling is notably sharper, replete with a plunging bonnet line, slimline LED headlights (integrated into the edges of the bold graphic grille), as well as fang-like LED daytime running lights – that graphic is, of course, complemented with “three-claw” LED tail-light clusters.

The three internal combustion engine (ICE) variants will be powered by a 96kW/230Nm 1.2-litre three-cylinder turbo-petrol engine, paired with an eight-speed automatic transmission.

However, the 308 GT Sport Hatch Plug-In Hybrid – which is likely to be the only plug-in hybrid vehicle in the small hatchback segment once the Ioniq PHEV variant is discontinued – will combine a 132kW 1.6-litre four-cylinder turbo-petrol engine with an 81kW electric motor, mated to an e-EAT8 automatic transmission, providing a combined 165kW/360Nm.

As GoAuto reported last year, when the PHEV’s 12.4kWh high-voltage battery is fully charged it facilitates a claimed all-electric driving range of up to 60km (European manufacturer’s claim).

The interior takes on a very similar theme to the exterior, with plenty of straight lines, harsh angles, and sharp contours. The dashboard of Peugeot’s i-Cockpit rises high into the driver’s eyeline with the steering wheel mounted comparatively low in relation to the digital instrument cluster.

One notable omission from the cabin is a conventional transmission lever – it has been substituted for a push button-style selector mounted below the infotainment system and start button.

To match the 308’s elegant new cabin is an extended list of features, many of which may be offered here, including adaptive cruise control with stop-go function, long-range blind-spot monitoring, rear cross-traffic alert, a high-definition 180-degree reversing camera and 360-degree parking assistance, keyless entry and start, a heated multifunction steering wheel, and auto-dipping wing mirrors.

“The range has been carefully considered to provide a strong offering for Australian consumers looking for dynamic and stylish design, an enjoyable and convenient driving experience and enhanced technology across both electrified and turbocharged ICE powertrains,” Ms Gillis added.

Further information, including specification and pricing, will be available closer to launch, but in the meantime, prospective customers can register their interest for the new Peugeot 308 online.