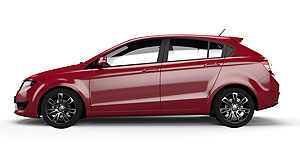 MALAYSIAN car-maker Proton will add three new turbocharged models before the end of the year as the brand reinvents itself for the future.

The launch starts next month with the Exora seven-seat people-mover, joined in October by the Preve GXR sedan, and in December by the hot Suprima S hatch.

The Exora will aim for the title as Australia’s cheapest people-mover, priced from $25,990 drive-away for the entry-level GX with features such as 16-inch alloy wheels, Bluetooth phone connection, and a 1.6-litre turbocharged four-cylinder engine producing 102kW of power and 205nm of torque and mated to a continuously variable transmission with six pre-set ratios.

The more richly equipped GXR, adding $2000 to the price, will include more creature comforts such as leather seats.

While the Exora will be Australia’s cheapest people-mover, it won’t be the safest. It’s count of four airbags means it is only eligible for a four-star crash rating.

Proton general manager of sales and marketing, Billy Falconer, said a future version of the people-mover would be engineered for a top five-star rating in line with Proton’s goal to improve safety across the range.

In October, the Malaysian brand will add the Preve GXR sedan fitted with the same 1.6-litre engine, but mated to a CVT with seven pre-set ratios.

The Australian arm is still in talks with the factory over pricing, although like the rest of the range the car will sell on value. Features will include push-button start, dusk-sensing headlight and rain-sensing wipers.

Due in December is the Suprima S hatch, also featuring the 1.6-litre fitted to the seven-ratio CVT, and also yet to settle on pricing.

It will include equipment borrowed from the Preve GTR, but will be the technology leader with a seven-inch touchscreen including satellite navigation, LED tail-lights, daytime running lights, a hill hold function that stops the car rolling back on slopes, and parking sensors.

While both more premium cars will feature the CVT for now, Proton expects to add a six-speed manual gearbox to showroom choices early next year.

Part of Proton’s plans to expand its Australian sales is an expansion of dealerships, with aims to expand them up to 30. The company has already added seven new dealers.

The planned sales growth can’t come soon enough for the fledgling company, with VFACTS figures for August showing brand sales of just 36 units (down 68.1 per cent on August 2012). Annual sales of 389 vehicles are fewer than half that of last year.