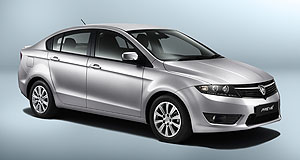 PROTON has boosted its Preve sedan range with the addition of the more powerful turbocharged 2.0-litre GXR variant from $23,990 drive-away.

The GXR is powered by the same 1.6-litre four-cylinder turbocharged engine found under the bonnet of the recently launched Suprima S hatch, matching its sibling’s 103kW/205Nm output.

Add in the fact that the Malaysian car-maker is currently offering a $1000 factory bonus for a limited period and the cost of getting into a GXR comes down to $22,990.

The Preve launched in Australia at the start of 2013 with an $18,990 drive-away price, but Proton has since dropped the entry price of the non-turbo base GX to $15,990 in a bid to attract more buyers.

The Preve GXR is matched with a seven-speed continuously variable transmission (CVT) with a six-speed manual variant set to arrive in the first quarter of 2014. Pricing for the manual is yet to be confirmed but is expected to undercut the CVT.

Pricing for the mechanically identical Suprima S GXR is $24,990 in six-speed manual guise and $26,590 for the CVT, although Proton has previously said it will pitch the hatch as a more premium offering than the Preve.

Official fuel economy for the Preve GXR is 8.6 litres per 100 kilometres on the combined cycle, which is a 0.2L/100km improvement over the Suprima S.

This still places the Proton at the bottom of the pack as far as fuel efficiency is concerned with almost all of its competitors sipping less fuel than the Malaysian-built sedan.

Even the mid-size Toyota Camry is more efficient, with an official fuel economy figure of 7.8L/100km for the 2.5-litre four-cylinder Altise.

Proton-owned British sportscar-maker Lotus provided the suspension specification for the Preve, which the company says is designed for “driving enjoyment, occupant safety and comfort”.