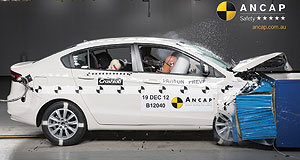 THE new Proton Preve small sedan has scored a five-star ANCAP safety rating, marking the first time the Malaysian car-maker has achieved the maximum score. The result realises company predictions that the car would achieve the maximum score following development testing. As we reported exclusively last year, Proton used Sydney’s Crashlab facility – as used by ANCAP – to help improve its safety performance. The company’s extra focus on safety paid dividends, with its previous best result a mediocre three stars for its smaller S16 model, while the only other Proton tested – the now-discontinued Jumbuck ute – notoriously scored just one star when tested in 2009. Preve will officially launch in March as the spearhead for the brand’s ambitious plan to almost quadruple sales this year. Of the 3500-4000 sales the company is targeting this year, Preve is expected to account for as much as 80 per cent of total volume.

Priced from a sharp $18,990 driveaway (and an extra $2000 for the CVT automatic version), the Preve comes standard with six airbags – dual front, side and curtain. A turbocharged sports version is due mid-year, while the hatchback is set to arrive before the year is out.

ANCAP chairman Lauchlan McIntosh applauded the result, which he said was “testament to the commitment of Proton senior management and its engineers to incorporate high levels of safety into their new vehicles”.

“Proton hasn’t let the previous poor results for its vehicles hold it back, rather they’ve used this as incentive to strive for the top safety rating for the Preve,” he said. “A lot of time and effort has been invested in improving the design and safety equipment of the Preve and it is reassuring to see Proton reach this mark.” The sole dull spot on an otherwise bright result for the company was a ‘marginal’ pedestrian safety rating. Mr McIntosh said ANCAP would “encourage” Proton to work on this area, keeping in mind its stringent new standards are set to be gradually introduced over the next few years. An aggressive marketing effort for the Preve has already started with a national television advertising campaign on the 7, 9 and 10 networks, which will be supported across other media including online. The Preve sedan is almost the same length as a Toyota Corolla sedan, but slightly wider and higher, with a large 508-litre boot capacity that comes close to the new Nissan Pulsar sedan’s class-leading 510 litres.

The 1.6-litre four-cylinder petrol engine produces 80kW of power and 160Nm of torque, with combined-cycle fuel consumption of 7.2 litres per 100 kilometres for the manual and 8.0L/100km for the CVT.