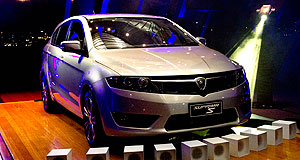 PROTON’S ongoing efforts to improve its brand image and sales performance in Australia received a boost this week with the launch of the Suprima S small hatchback, priced from $21,790 driveaway ahead of its official showroom arrival on January 1, 2014.

The bullish Malaysian car-maker is determined to shed its budget image and move further upmarket in a bid to improve its tiny 0.1 per cent share of Australia’s new-vehicle market, with the Suprima S entering the biggest and arguably most competitive segment.

The $21,790 driveaway price is for the base GX variant matched with a continuously variable transmission (CVT), but by early next year the entry level for the all-new small-car range will drop to $19,790 driveaway with the arrival of a manual version.

Likewise, the GXR range-topper is priced at $26,590 driveaway at launch for the CVT auto, with a manual variant set to arrive a few months after with a $24,990 d/a sticker price.

Rather than introducing another cut-price, cheap-and-cheerful model, Proton has packed the five-door Suprima S with a generous standard features list and says its new contender is the best-equipped Proton ever sold in Australia.

Proton Cars Australia general manager of sales and marketing Billy Falconer said the company was not necessarily targeting competitors at the lower end of the small-car segment, but was instead focusing on the segment as a whole.

“Basically anyone selling here is a competitor (and) we are not saying any one of those are the ones we are directly competing with,” he said. “We are looking at all those brands and all those vehicles on offer in those segments and we have done a lot of analysis on all the competitors in those segments.

“It is about lifting the brand image away from that ‘cheap and nasty’ and I guess some of the lower brands out there that we want to move away from.”

While the mechanically related Preve sedan that launched earlier this year is currently being pushed with a $15,990 driveaway price and has less standard gear, Proton’s pricing puts it in the same league as mainstream small-car rivals including the market-leading Toyota Corolla (from $19,990), Nissan Pulsar hatch (from $18,990), Holden Cruze (from $19,490) and Kia Cerato (from $19,990), all excluding on-road costs.

Proton executives at this week’s launch event did not reveal sales targets, but hopes are high for the stylish hatchback and the Malaysian brand is no doubt hoping to shift more units than the Preve has managed since its launch at the start of this year (222 registrations to the end of October).

The Malaysian brand collaborated with Italdesign Giugiaro in designing the Preve and this style has been retained for the Suprima S hatch. In fact, the front two thirds of the car is mostly Preve, with additional touches such as a black honeycomb grille and LED daytime running lights (a first for a Malaysian car) differentiating it from its more budget-friendly booted twin.

The rear end is a completely new design, and the car features a new 16-inch (GX) or 17-inch (GXR) seven-spoke alloy wheel design.

Proton is leveraging its ownership of British sportscar-maker Lotus in promoting the Suprima S, and as GoAuto has reported, the new model is the first in Proton’s line-up since the Satria GTi of the 1990s to overtly feature handling development by Lotus.

Power comes from a 1.6-litre turbocharged four-cylinder petrol engine delivering 103kW at 5000rpm and 205Nm of torque from 2000-4000rpm. The ‘ProTronic’ CVT has seven ‘ratios’, while the forthcoming manual is a six-speed unit.

Proton claims the Suprima can accelerate from 0-100km/h in 9.9 seconds on its way to a top speed of 190km/h, while fuel consumption comes in at 8.8 litres per 100 kilometres on the official combined cycle.

Fuel use for the turbocharged Suprima S is naturally a bit thirstier than the atmo Preve, which has official figures of 7.2L/100km for the manual and 8.0 for the CVT. It also consumes more than the 1.4-litre Cruze turbo that sips 6.4L/100km in manual guise and 6.9L/100km with an auto.

The vehicle architecture is shared with the Preve sedan, along with major chassis hard points such as the suspension configuration comprising MacPherson struts up front and a multilink arrangement at the rear.

Lotus ride and handling has been developed especially for the Suprima S and Proton says it makes for an “agile chassis” that delivers an “incomparable driving experience and enjoyment behind the wheel every time”.

The point is pushed further with the inclusion of a ‘Lotus Ride and Handling’ badge on the rear of the car.

Both the GX and GXR carry standard features such as front and rear foglights, daytime running lights, a rear spoiler, Bluetooth phone and audio, USB and auxiliary jack and steering-wheel phone and audio controls.

Proton is still to provide an official cargo capacity for the Suprima S, saying only that it has “plenty” of usable luggage space behind the 60/40 split-fold rear seats.

In a move to further distance itself from its less-than-stellar safety record, Proton is heavily promoting the safety credentials of the Suprima S. Along with the aforementioned standard safety equipment, the vehicle was recently awarded a five-star crash-test rating from Australasian New Car Assessment Program (ANCAP).

Proton says its ‘Reinforced Safety Structure’ frame developed specifically for the Preve and Suprima S was the key to its top crash-test rating.

To sweeten the deal, the Malaysian brand is offering an impressive five-year/150,000km warranty, roadside assistance over the warranty period, a five-year/75,000km free servicing deal and a seven-year anti-corrosion warranty.