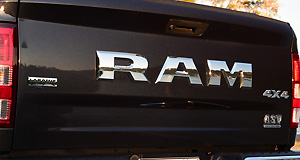 RAM Trucks Australia has lobbed pricing for its diesel-powered 1500 Laramie full-size pick-up, dubbed EcoDiesel, that will sit atop the entry-level truck line-up at $109,950 plus on-road costs.

All Ram 1500 vehicles send drive to all four wheels via an eight-speed automatic transmission, but crucially the oil-burner sips just 11.9 litres per 100km compared to its petrol sibling’s 12.2L/100km economy rating.

Of note, the Ram 1500 Laramie EcoDiesel is also at least $30,000 more expensive than its aforementioned competitors.

When compared to its petrol-powered 1500 siblings, though, the EcoDiesel is down on braked towing and payload ability by 1000kg and 100kg respectively.

Matching the petrol 1500 Laramie in specification, the EcoDiesel is equipped with 20-inch wheels, while its grille, bumper, door mirrors and exhaust tips are all trimmed in chrome.