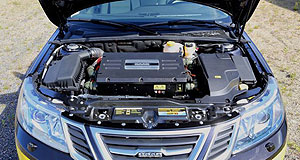 SAAB has unveiled a prototype of its electrified 9-3 Aero sedan as the struggling Swedish brand’s new owners admit it does not have the money to pay outstanding debts to suppliers.

It is the first Saab-badged 9-3 Aero with an electric powertrain since National Electric Vehicles (NEVS) bought the embattled car-maker in 2012, but it is still in the testing and development phase.

The car was shown at Saab’s Trollhattan factory yesterday where vice president of engineering and product development Stig Nodin said the EV retained the driving dynamics of the petrol-engine 9-3 Aero sedan, which NEVS put back into production in 2013.

“We are happy to present the result of NEVS engineering into a real Saab EV product,” Mr Nodin said.

“The Saab cars’ well-known performance and safety is maintained and we foresee a very good product for the market. When we developed the Saab 9-3 Aero Sedan Model Year 14, we focused on enhancing the driving experience, safety and quality.

“And the starting point for our development of the Electric Vehicle project was to maintain all the good attributes and characteristics.”

NEVS says the 9-3 Aero EV prototype is powered by a 100kW electric motor which has an electric range of 200km and can dash from a standing start to 0-100km/h in 10 seconds, before hitting a maximum top speed of 120km/h.

Lithium-ion batteries are stored under the floor, which NEVS says does not impinge on interior or cargo space.

The Chinese-Japanese owned company was hoping for the 9-3 Aero EV to go into production earlier this year, but its financial difficulties have held up development.

A statement released by NEVS last week revealed production at the Trollhattan plant in Sweden had ceased until new backers could be found to inject further funding.

“NEVS hereby clarify that the company is not insolvent,” the statement read.

“The company does not have enough liquid cash as today to pay all outstanding debt but NEVS’ assets are larger than its debt. NEVS today cannot say exactly when, but NEVS’ suppliers will get paid.

“During the summer, the dialogues with the two major vehicle manufacturers have continued and developed in a positive direction. It is a thorough evaluation process that is still ongoing, and the discussions have not been finalized yet.

“After the funding is secured, and after that NEVS business plan is updated together with its new partners, NEVS will be able to make the decision on when the Trollhattan factory can resume its production.”

As reported by GoAuto recently, the identity of the two vehicle manufacturers believed to be in negotiations with NEVS are India’s Mahindra & Mahindra and China’s Dongfeng.