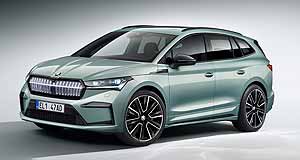 However the Enyaq is not destined for local shores, with Skoda Australia telling GoAuto there are no plans to bring the zero-emissions model Down Under.

Based on the Volkswagen Group’s MEB modular electric platform, the Enyaq will be offered globally with the choice of three battery sizes and five different power outputs ranging from 109kW to 225kW, including an RS-fettled variant.

The choice of rear- or all-wheel drive will also be offered, while driving range can extend up to 510km based on the WLTP cycle.

Finally, the last three grades all employ the full-size 82kWh battery, which in the rear-drive Enyaq 80 iV allows for the greatest WLTP range (510km), with a power output of 150kW/310Nm.

The 80x iV adds a second motor to the front axle for all-wheel drive, with power increasing to 195kW/425Nm, however the range takes a hit and drops to 460km.

Topping the range is the Enyaq RS, the first-ever all-electric RS variant, with power boosted to 225kW/460Nm (making it more powerful than any other Skoda Down Under) and range steady at 460km.

Sprinting from standstill to 100km/h in the Enyaq RS takes 6.2 seconds, with a top speed of 180km/h – 20km/h more than the rest of the Enyaq range.

Charging capacity on the Enyaq extends up to 125kW, with the most powerful 82kWh battery capable of charging from five to 80 per cent in 38 minutes when using a DC fast charger.

Using an 11kW AC wall box will take six to eight hours for a full charge, depending on battery size.

The exterior styling of the Enyaq shows a design that is recognisably Skoda but with progressive elements that separates it from its internal-combustion counterparts, starting with its Crystal Face grille.

Offered on 82kWh variants, the Crystal Face places 130 LED light modules in and around the grille giving it a unique lighting signature, paired with the LED matrix headlight for a dazzling front end.

Alloy wheel designs range from 18 to 21 inches in diameter, while the drag coefficient comes in at 0.27.

Measuring 4649mm long, 1879mm wide and 1616mm tall with a 2765mm wheelbase, the Enyaq is slightly smaller than the Kodiaq, and plays in the medium SUV segment with boot capacity rated at 585 litres.

Inside, the cockpit is dominated by a 13-inch touchscreen – the largest of any Skoda – which can be operated through voice and gesture control, as well as the typical touch function. 50 iV grades get a 10-inch screen.

It pairs with a 5.3-inch digital instrument cluster, while a Canton sound system is available as an option.

Skoda will build the Enyaq at the Mlada Boleslav factory in its native Czech Republic.