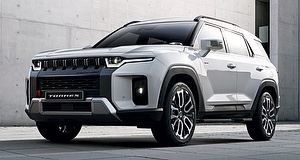 DESPITE what may be a limited future, SsangYong is pushing ahead with plans to build a mid-sized SUV it hopes will rival the Mazda CX-5.

Assuming the firm remains afloat, Korea’s number-three car-maker will debut its Torres SUV in Australia sometime next year, the model set to enter production imminently leveraging components from the smaller Korando and potentially priced at the sharp end of the class here in Australia.

The Torres has yet to be officially unveiled and talk of the Seoul-based firm’s financial woes are certainly enough to dampen consumer confidence.

What we do know is that the model runs the same 1.5-litre turbocharged four-cylinder petrol engine as found in the Korando. Making 125kW and 280Nm – slightly more than the Korando – the Torres uses a six-speed automatic transmission and is available in front- or all-wheel drive configuration.

SsangYong is yet to detail fuel consumption or CO2 emissions for the Torres, but with a kerb weight of between 1520 and 1610kg (depending on variant), it certainly will not be the most efficient offering in its class.

An all-electric version of the Torres is also in the pipeline with a 140kW motor fed by a 61.5kWh battery. Estimates place the model’s driving range at 400km.

South Korean certification documents suggest the Torres may be a replacement for the Korando SUV, a point SsangYong denies.

Inside, the Torres is a stylish rendition of something currently from Hyundai or Kia, including three infotainment screens on a well laid out dashboard. The digital instrument cluster sits front and centre ahead of the driver with an angled 12.3-inch floating infotainment screen dominating the centre of the dash. A supplementary 8.0-inch screen positioned between the infotainment array and the console, handles functions including climate control.

While it is expected interior and upholstery colours will be dark for the Australian market, the Torres is offered with a light tan, multi-hued upholstery mix in its home market. Features including heated and ventilated seats, leather upholstery and electric seat adjustment are also found in higher grade variants.

SsangYong says the Torres offers 839 litres of cargo space with the rear parcel shelf removed and as much as 1662 litres of luggage space in two-seat mode. The Torres is strictly a five-seat proposition with no seven-seat option planned. Interestingly, a dual-cab utility version is rumoured to be in the works.

Standard features and pricing are yet to be revealed for the Australian market but should be generous given the equipment levels found in other models available. Towing capacity, safety equipment and an ANCAP safety rating will also be announced in due course.

Visually, the Torres is a handsome SUV with distinctive angular lines channelling some of the more desirable European SUVs such as the latest Land Rover Defender, along with some references to Jeep products. The spare wheel is located on the Torres’ tailgate which dictates a single-hinged back door.

SsangYong continues to struggle financially since its most recent merger with e-Bus manufacturer Edison Motors fell through. The South Korean marque has been owned by several car-makers since emerging after the Korean War. Numbered among former owners are a cement company, Daewoo (before it was subsumed), Mercedes-Benz, and Indian conglomerate Mahindra & Mahindra.

The latter, most recent owner, ran into difficulty coping with SsangYong and its own Mahindra brand, unable to realise an effective marketing plan for both brands in its own country and failing to adequately fund SsangYong going into the future.

Yet another potential owner is in the offing, but SsangYong could also choose to file for bankruptcy, or the company could be nationalised with South Korean Government funding.

Whatever happens, Ssangyong is best described as being on shaky ground… as it has been for years.