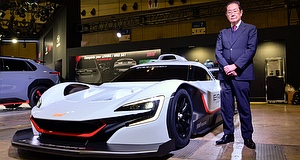 SUBARU has announced that it will cancel its desirable WRX STI variant effective immediately, meaning the next-generation WRX will go without the higher-performing variant for the first time since its debut in 1994.

The Ota-based company said in a statement that it will remain focused on sports and performance variants, but believes all cars must move with the times.

“As the automotive marketplace continues to move towards electrification, Subaru is focused on how our future sports and performance cars should evolve to meet the needs of the changing marketplace and the regulations and requirements for greenhouse gasses (GHG), zero emissions vehicles (ZEV), and Corporate Average Fuel Economy (CAFE),” the statement read.

“As part of that effort, Subaru Corporation is exploring opportunities for the next generation Subaru WRX STI, including electrification. In the meantime, a next generation internal combustion engine WRX STI will not be produced based upon the new WRX platform.”

Perhaps hinting that the Subaru Technica International motif will return with electric power – likely taking some attributes from the 800kW all-wheel drive STI E-RA concept debuted at the Tokyo Auto Salon earlier this year – the brand said it will move to offer further electrification of its range before the end of the decade, importantly with a focus on motorsport-derived performance models.

“The Subaru WRX STI and the STI brand represent the zenith of Subaru’s performance vehicles exemplifying Subaru’s unique DNA and rally heritage. As we look to the future, we also look forward to incorporating the essence of STI into our next generation of vehicles,” the statement concluded.

The announcement means the new-generation WRX will be offered only with a 202kW/350Nm turbocharged 2.4-litre boxer engine in its most powerful form. The model is expected to carry the WRX nameplate through to the end of the decade, at which point it is understood an electrified variant will take its place.

In a statement, Subaru Australia managing director Blair Read said the brand is working hard to ensure Suabru fans have an exhilarating future to look forward to.

“This is a clear statement of the future performance direction of the Subaru Corporation and Subaru Technica International. The prospect of what the STI engineering team can do with an electrified platform ensures an exhilarating future for Subaru fans, and we look forward to sharing with you what STI will reveal next.”

Mr Read said Subaru will continue to offer STI Performance Parts for models including the BRZ and Impreza with “STI inspired performance and styling parts, and special limited edition vehicles offerings” in the pipeline.

Subaru is expected to release sedan and wagon versions of its latest WRX in Australia by the end of June this year.

While pricing is yet to be revealed, it is understood the Impreza-based models will continue to rival contemporaries including the Ford Focus ST (from $44,890 before on-road costs), Honda Civic Type R (new model TBA), Hyundai i30 N (from $48,678 + ORC), Renault Megane RS ($60,090 + ORC), and forthcoming Toyota GR Corolla.