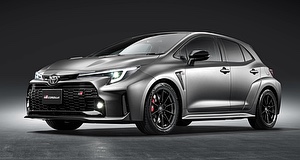 TOYOTA has this week revealed a two-seat, track-focussed version of its forthcoming GR Corolla.

The five-door hatch – dubbed Morizo Edition – is due in Australian showrooms next year and includes R-spec tyres, more torque, track-ready suspension and a set of rear-end stiffening bars in place of the rear seats.

Although stiffer, the two-seat GR Corolla is also heavier than the five-seat variant, in no small part due to the additional body reinforcement braces. The 2S (two-seat) model tips the scale at 1470kg, some 30kg more than the 5S version.

At the business end, the GR Corolla 2S is powered by the same 1.6-litre turbocharged three-cylinder engine as the 5S variant. Power output remains unchanged at 220kW, however the 2S scores an additional 30Nm of torque, taking the total figure to 400Nm.

Torque delivery is broader than before arriving between 3000-5500rpm instead of 3250-4600rpm, Toyota also claiming the GR Corolla 2S offers more throttle response through the engine’s middle reaches.

In making the most of these gains, Toyota has fitted the Morizo Edition with closer first, second and third gear ratios and has fitted the model with a higher final drive ratio to “provide a particularly engaging driving feel”.

With the remainder of its mechanicals largely derived from the GR Yaris, Toyota’s hotted-up Corolla not only provides a bigger and more practical companion to the pint-sized Yaris, but it finally gives the Japanese automaker a proper rival to other hot hatches like the Volkswagen Golf R and Honda Civic Type R.

It’s a space Toyota hasn’t played in before, much to the chagrin of company president Akio Toyoda.

Mr Toyoda, grandson of Toyota Motor Corporation founder Kiichiro Toyoda, has spent the past decade rebuilding a performance product portfolio of the brand, beginning with the first-generation Toyota 86 that launched in 2012, with the ultimate aim of eliminating the brand’s reputation for bland – but dependable – vehicles.

Toyota Australia says it will open the order books for two- and five-seat versions of the GR Corolla from Q4 this year. Pricing and final specifications will be announced closer to the model’s local launch.