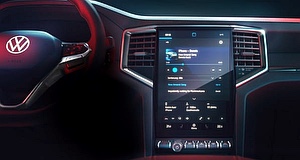 VOLKSWAGEN Commercial Vehicles will follow the Ford Ranger in offering a choice of 10.0- or 12.0-inch portrait-oriented infotainment touchscreens in its upcoming Amarok.

In a recent teaser, the Wolfsburg-based brand revealed that it would offer the same multifunction display (flanked by ventilation outlets and underscored by piano-style keys and a rotary volume dial) in its next-generation ute.

The system – which runs Ford’s SYNC 4 operating system – can be used to control features such as heating, ventilation and air-conditioning (HVAC), audio, navigation and communication, seat heating and a wide range of vehicle settings.

VW says it will offer more than 30 driver-assistance systems, which can be controlled via the Amarok’s dominant central screen, and that more than 20 of those technologies will be new to the dual-cab model, including lane-change and lane-keeping assistants, road-sign recognition and even speed assist.

The touchscreen menu will also incorporate various switchable drive and off-road modes, including the ability to engage the rear differential lock (where fitted).

Previously, Volkswagen Commercial Vehicles has teased external design elements of the new Amarok including its frontal treatment, LED headlights, stamped tailgate (with a V6 badge) and a number of the model’s dimensions and trim grades.

The Amarok will be 100mm longer than the outgoing model (now 5350mm), 40mm wider and ride on a 3270mm wheelbase (+175mm). It will also offer an increased payload capacity of up to 1200kg and braked towing capacity of 3500kg. As before, the Amarok will be capable of accommodating a full-size European pallet between its wheel arches.

Volkswagen will initially offer the Amarok in dual-cab format with single-cab variants to follow in due course. The model promises to be more capable both on- and off-road and will be offered with a new V6 diesel engine, as well as “four further engine specifications”, at least one of which will be petrol.

Rear-wheel drive and two different four-wheel-drive (on-demand or permanent) configurations will be available, which suggests the model will closely emulate the driveline offerings found in its Ranger twin-under-the-skin.

It will also offer shorter front and rear overhangs than before, ensuring improved off-road performance, which the brand says will be further bolstered by “significantly greater water fording depth”.

Compared with its Ford cousin, the Volkswagen will offer a brand-specific audio system, as well as leather-look surfaces (on the instrument panel and door cards) with “distinctive decorative stitching”.

VW further says that it will offer the Amarok with “comfortable, wide seats”, which can optionally be specified with 10-way electric adjustment in the front row.

While the final design of the Amarok is yet to be unveiled, Volkswagen says the model will have distinctive appearance with a straight, very upright bonnet, horizontal upper radiator grille crossbars and narrow LED headlights, which are standard on all versions.

Volkswagen will offer its IQ.Light LED matrix headlights that “will underline the Amarok’s high-tech look” (as previewed in the most recent teaser) as an optional feature on some variants, but most reports suggest it will probably be standard on high-grade variants.

In profile, the Amarok’s flat-topped wheel arches and 21-inch alloy wheels are evident, and the model is further differentiated from its predecessor by a new-look rear-end with LED taillights and A-M-A-R-O-K lettering across the tailgate.

The Amarok is due to be unveiled in full on July 7.